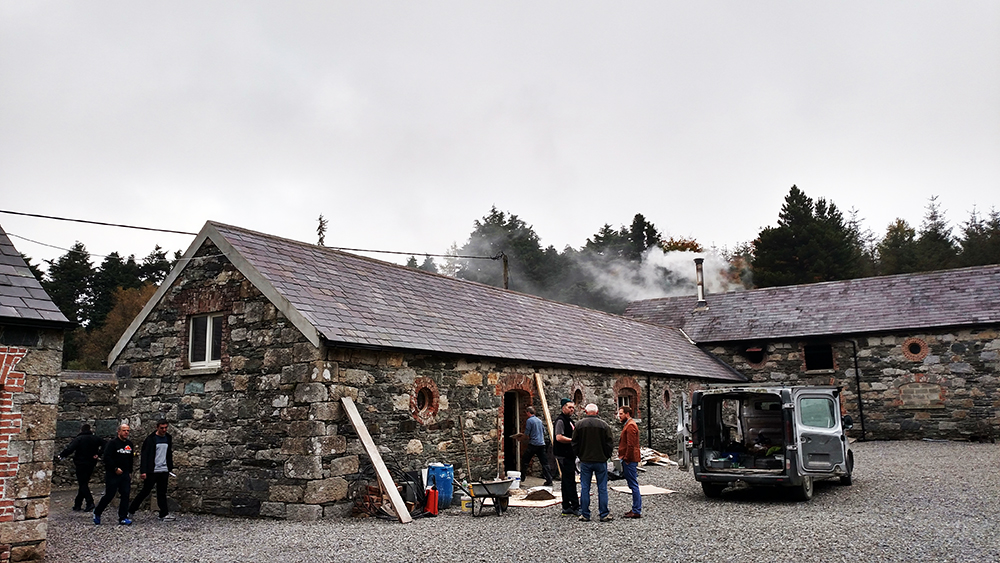 We are surrounded by 3,000 acres of forest in the mountains of County Wicklow. It’s December, and it’s frosty. Looking up the long dirt road that leads to a row of rustic-looking buildings, it’s hard to believe that a drug and alcohol rehabilitation centre could be as picturesque as this. But Tiglin is here to challenge your perception.

A former outdoor pursuits centre, Tiglin Challenge was transformed into a rehabilitation clinic for men (and women, housed on a separate site) in the latter part of 2008. It’s now a fully equipped residential housing programme for those affected by homelessness and drug and alcohol addiction on the streets of Dublin.

Phil Thompson, Tiglin’s CEO and founder, is waiting at the main office to explain what’s involved in that rehabilitation – and explain how crucial the oral care provided by on-site dentist Dr Johnny Fearon is to the individuals recovering here.

The road to recovery

Tiglin’s recovery programme lasts 16 months, with 10 to 12 months spent on site and the rest in the outside world. The centre currently houses around 30 men, with space for more.

‘The programme is very rounded, in that we don’t just focus on the addiction side of things,’ Phil explains. ‘We focus on life after addiction, so that when people get sober and clean they have the skills to operate in daily life. It’s about finding what people want to do and what they’re good at, and making it work for them in the future.’

Each resident undergoes a structured, individualised programme. From morning to noon, their time is taken up by learning, meditation, counselling, training or working.

Phil adds that they have ‘pockets’ of free time but that most of this is scheduled for therapeutic activities; for addicts, this is often the best method on the way to recovery. For example, the Institute of Technology in Carlow runs entry level courses right up to intermediate or advanced on site for residents – a big deal for former addicts who have often spent time in prison.

‘We just had 11 guys graduate from IT Carlow last week with their level six,’ Phil says. ‘They have the chance to work on purchasing strategies, social media and marketing. Guys like this don’t get that opportunity in the outside world – from the streets to an office, it’s not an easy path.’

Tiglin survives on hand-me-downs and donors. The carpets, tables, chairs, TVs – everything has been donated, either through companies or individuals. The white carpets in the sitting rooms and training areas have come from Irish businessman Tony O’Reilly’s Castlemartin estate – even the snooker table in the games room belonged to the former billionaire.

Phil adds that when it comes to recovery, if you focus too much on therapy, you can only get so far. It’s about building skills and inspiring interest – something residents can hold onto when they leave.

Ireland has one of the highest levels of drug-related deaths in Europe. There are at least 15,000 heroin users in the country, the majority of whom live in the Dublin area, according to Merchants Quay Ireland (Condon, 2003).

Addiction is complicated, Phil explains. Despite the support and training offered by Tiglin, residents often leave the programme without completing it.

‘We’ll often get early leavers. People will stay for a few weeks and then leave, and you’ll have some people that will come back and some that relapse. Those kinds of things happen; part of recovery is relapse.’

Decky, a past resident, explains the effects recovery has had on him at Tiglin. He spent most of his life as an addict, using heroin, methadone and Valium, until his addiction counsellor introduced him to Tiglin.

‘I didn’t have any hope when I came to Tiglin,’ he says, ‘I just wanted to get through it. I was in absolute chaos.

‘The best thing about Tiglin has been the support. The psychiatrists, probation officers, social workers and everyone else I had worked with before Tiglin didn’t have what I needed. Tiglin offered me a support system and encouragement, a way out.’

As part of his recovery, Decky underwent dental treatment. ‘I wouldn’t have had the confidence to go to college and get a job if I hadn’t got my teeth fixed. I wouldn’t have been able to face people on a daily basis. Every time I talked, I had my hand over my mouth.’

Tiglin’s on-site dental surgery has become an important part of the programme. Run by dentist Dr Johnny Fearon alongside Kim Behan, dental nurse and clinical product specialist at Ivoclar Vivadent, the two regularly volunteer their time and services for the dental needs of Tiglin residents.

‘Johnny and Kim come up in their free time and often spend evenings and weekends here,’ say Phil. ‘We’ve had huge support from Henry Schein Ireland and a number of other companies in getting everything kitted out, but without Johnny and Kim it would have been really hard to get the surgery up and running.’

Johnny and Kim visit Tiglin as often as they can, which can depend on their own full-time work and family commitments. ‘We often end up visiting every fortnight,’ says Johnny. ‘We take on the simple work like extractions and fillings on site and for more complex surgery, we bring back any patients to my practice in Naas.’

A reason to smile

The clinic was opened in September 2016 by the Minister for Health, Simon Harris TD, with products and equipment generously donated by dental companies such as Henry Schein Ireland and its partners: Coltene, Dürr Dental UK, Hu-Friedy and Septodont.

Pat Bolger, managing director of Henry Schein Ireland, as well as Siobhan Cleary, John Rice and Henry Schein staff, volunteered to help equip the surgery and supply products themselves. Kim estimates that they received around €2,500 worth of hygiene products from Celtic Marketing and Ivoclar Vivadent.

The team works through a slush fund of around €5,000, which pays for treatments, products and equipment, as part of a grant from the Wrigley’s Foundation.

The impact of this kind of dental work for recovering addicts is threefold: it gives residents their confidence, smile and quality of life back. ‘Our job is to provide more advanced treatment that is not covered by the Medical Card scheme,’ explains Johnny. ‘The provision of crowns, implants, veneers – all this is important to Tiglin residents to be able to rehabilitate back into society.

‘Very often we’re dealing with brown stubs for teeth. Drug addiction and being homeless ruins your dentition. Even if they have gone through the programme and recovered, it’s going to be almost impossible to get a job or even an interview. We give them back the confidence to start again.’

Despite the generosity of suppliers and dental professionals, more help is needed.

‘The more people and companies we have on board, the easier it will be to help residents and the quicker we can get through everybody,’ Kim says. ‘I work with Ivoclar, which has donated the fluoride that we use, as well as composites, cements, lights, and a big chunk of what we need. I suppose the bigger work we need done comes from a laboratory.’

Johnny adds: ‘A lab is the place that will make us the crowns and bridgework for our patients, so we’re hoping to find a sympathetic lab that will perhaps work at cost price or a reduced price, because that lab work is what eats into our slush fund quite considerably.’

Johnny and Kim’s vision for Tiglin remains bright: both want to see more use of the surgery not just from dentists, but GPs, hygienists, therapists and whatever else is needed.

‘Tiglin has a wonderful ambiance and space,’ Kim notes, ‘it would be a shame to see it go to waste.’

Johnny also wants to encourage more dentists to make use of their skills for addicts and avoid ‘stereotyping’ addicts and the homeless. ‘I think it’s important to see these people as people,’ Johnny explains. ‘It’s vital to have the right attitude and not to ostracise these patients. Kim and I have gotten to know a lot of people here over the last few months and you could not meet a more terrific bunch.’

When I ask Phil what the next step is, he agrees with Johnny. Just like Decky, many residents arrive with a multitude of substance dependencies, and a medically assisted detox would ensure their safety and full recovery.

‘We don’t have any outside medical staff, so detoxification is something we’re looking to get going,’ Phil says. ‘Prescription drugs are harder to get off because people often end up having seizures.

‘If we have to say no to somebody coming in here most of the time it’s because they are on a prescribed medication that we’re not medically equipped to deal with.’

Tiglin stands as an example of how much can be achieved when people come together with a common vision and are willing to get their hands dirty. They say many hands make light work, and Pat Bolger explains how true this is of Tiglin.

‘Projects like this are never really down to one or two individuals,’ he says. ‘They’re down to an army of people who are willing to get stuck in. It’s incredible to see the amount of people who have been part of this journey over the years, and we at Henry Schein are grateful to be a part of it.’

‘I think it’s about reshaping the way Ireland looks at addiction as a nation,’ Phil adds. ‘If you just look at it as a substance problem, you’re never going to get past that. It’s all-encompassing.

‘That’s why dentistry has just as important a place in rehabilitation as any other healthcare. Self-esteem and confidence is a huge part of recovery.

‘I think all of us learn from our mistakes, so one of the things we are very mindful of teaching every person is that relapses happen, but they don’t have to be the end of the road; they can be the reason you bounce back.’